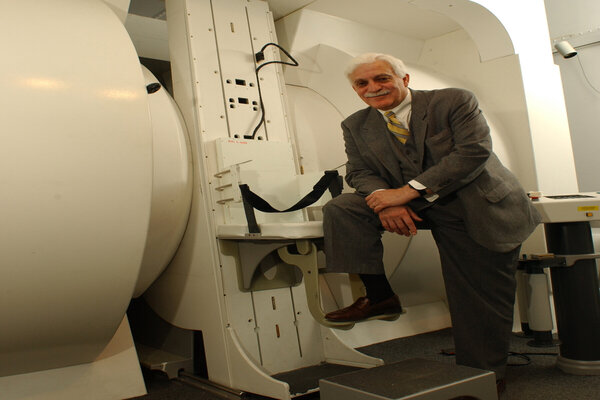 Incensed when two others won the Nobel Prize for the science behind the invention, he took out a newspaper ad that called his exclusion a “shameful wrong that must be righted.”

Dr. Raymond Damadian, who built the first magnetic resonance imaging scanner, which revolutionized doctors’ ability to diagnose cancer and other illnesses — but who, to his dismay, saw the Nobel Prize for the science behind it go to two others — died on Aug. 3 at his home in Woodbury, N.Y. He was 86.

The cause was cardiac arrest, said Daniel Culver, a spokesman for the Fonar Corporation, which Dr. Damadian founded in 1978.

Since Dr. Damadian and his research assistants finished building the first M.R.I. scanner more than 40 years ago, it has become an essential piece of medical equipment, allowing doctors to peer inside the human body with more detail and greater resolution than X-rays and CT scans provide, without exposing patients to damaging radiation as many other technologies do.

“We take it for granted now, but M.R.I. is absolutely spectacular,” Dr. Burton P. Drayer, the chairman of the radiology department at the Mount Sinai Health System in Manhattan, said in a phone interview. “M.R.I. is better at detecting cancers, particularly in the brain and spine.”

But the question of who owned the idea, and the device, was a contentious one from the start.

Two scientists whose research contributed to M.R.I. technology were later awarded a Nobel Prize, an honor that Dr. Damadian felt should have also gone to him. And no sooner had his machine come on the market than a handful of major corporations started producing their own versions, leading to years of court battles over patent rights.

The vision of scanning the human body without radiation came to Dr. Damadian in the late 1960s, he said, when he was working on nuclear magnetic resonance spectroscopy — which, until then, had been used to identify the chemical makeup of the contents of a test tube — at Downstate Medical Center (now SUNY Downstate Health Sciences University) in Brooklyn.

Working with rats, he discovered that when tissues were placed in a magnetic field and hit with a pulse of radio waves, cancerous ones emitted distinctly different radio signals than healthy ones.

He published his findings in 1971 in the journal Science and was granted a patent three years later for an “apparatus and method for detecting cancer in tissue.” It took 18 months to build the first M.R.I., originally known as a nuclear magnetic resonance scanner, or N.M.R. Its first scan, on July 3, 1977, was of Lawrence Minkoff, one of Dr. Damadian’s assistants — a vivid and colorful image of his heart, lungs, aorta, cardiac chamber and chest wall.

“Having birthed the original idea of the N.M.R. body scanner, we were intent on being the first to accomplish it,” Dr. Damadian said in the book “Gifted Mind: The Dr. Raymond Damadian Story, Inventor of the M.R.I.,” published in 2015, which he wrote with Jeff Kinley. “Failing to do so meant we might be denied the recognition for the original idea.”

But the technology behind the M.R.I. had several fathers.

Acknowledging that he was inspired by Dr. Damadian’s work, Paul C. Lauterbur of the State University of New York at Stony Brook had figured out how to translate the radio signals bounced off tissue into images. And Peter Mansfield of the University of Nottingham in England had developed mathematical techniques for analyzing the data, making the process more practical.

But Fonar was soon confronted with competition from major corporations like General Electric, Johnson & Johnson, Siemens, Hitachi and Philips.

Dr. Damadian sued them all for patent infringement. He lost his case against Johnson & Johnson when a federal judge in 1986 set aside a jury verdict in favor of Fonar.

The judge, Dr. Damadian said, “did everything he could to sandbag us in court.”

He won his biggest legal victory in 1997, when the U.S. Court of Appeals for the Second Circuit affirmed a lower court’s award of nearly $129 million in damages and interest from G.E. He also won smaller settlements from other manufacturers.

“The court verdict gives us official recognition for origination,” Dr. Damadian told The New York Times after the G.E. decision.

His pioneering work was also recognized when he received the National Medal of Technology from President Ronald Reagan in 1988 and was inducted into the National Inventors Hall of Fame in 1989. That same year he donated his first scanner, which he called Indomitable, to the Smithsonian Institution.

But the recognition that he craved most — a Nobel Prize — eluded him.

Raymond Vahan Damadian was born on March 16, 1936, in Manhattan, and grew up in Forest Hills, Queens. His father, Vahan, an Armenian immigrant from Turkey, was a newspaper photoengraver; his mother, Odette (Yazedjian) Damadian, was an accountant.

Raymond studied violin for several years at Juilliard but diverted to science when he received a Ford Foundation scholarship to attend the University of Wisconsin, Madison. He majored in mathematics there and graduated with a bachelor’s degree in 1956. He received his medical degree four years later from the Albert Einstein College of Medicine in the Bronx and then became a fellow in biophysics at Harvard, where he became familiar with nuclear magnetic resonance technology.

While working at Downstate and later at Fonar, Dr. Damadian was aware of Dr. Lauterbur, a chemist who was also working on M.R.I. imaging and with whom he shared the National Medal of Technology.

In “Gifted Mind,” Dr. Damadian acknowledged that Dr. Lauterbur “realized that the N.M.R. signal differences in diseased and normal tissues I discovered could be used to construct a picture (image).”

But in 2003, when Dr. Lauterbur and Dr. Mansfield won the Nobel Prize in Medicine for their contributions to the science of magnetic resonance imaging, Dr. Damadian was enraged.

He wrote a letter to the American Medical Association, proclaiming that “some unconscionable scientific pilferer is trying to steal my entire life.”

He then spent several hundred thousand dollars on an advertisement that ran in six major international newspapers. Headlined “The Shameful Wrong That Must Be Righted,” the ad claimed that the Nobel Prize committee had unfairly denied him the prize.

At the bottom of the ad he provided a coupon, addressed to the Nobel Committee for Physiology or Medicine, to let readers tell the committee that “the TRUTH must have a place,” and that it should add him as the third recipient of the award.

Dr. Hans Ringertz, chairman that year of the Swedish committee that awards the prize, had no comment on Dr. Damadian’s claims but told The Times that there was nothing to prevent Dr. Damadian from being nominated in the future.

A year later, Dr. Damadian received one of the two annual Bower Awards given by the Franklin Institute, a science museum in Philadelphia. He was cited for his business leadership.

“There is no controversy in this,” said Dr. Bradford A. Jameson, a professor of biochemistry at Drexel University who was the chairman of the committee that chose the winners. “If you look at the patents in this field, they’re his.”

Dr. Damadian said then that he was no longer concerned with the Nobel dispute. But he told The Times, “If people want to reconsider history apart from the facts, there’s not much that I can do about that.”

Dr. Damadian continued to innovate. He created open M.R.I. machines, which alleviate the claustrophobia patients can experience during scans when they are moved slowly through a tight tunnel, as well as mobile and stand-up scanners.

In recent years, he was focused on research that included imaging cerebral spinal fluid as it flowed to the brain.

Fonar made and installed about 500 M.R.I. scanners, but today it is focused on managing imaging centers in the United States and servicing existing scanners.

Dr. Damadian is survived by his daughter, Keira Reinmund; his sons, Timothy, Fonar’s president and chief executive since 2016, and Jevan; nine grandchildren; three great-grandchildren; and a sister, Claudette Chan. His wife, Donna (Terry) Damadian, died in 2020.

In 1982, as the industry he helped create was in its infancy, Dr. Damadian told Newsday that he had not lost his inventor’s zeal for what lay ahead.

“In 1977, I knew my machine could be a reality,” he said. “But until then, it was like building a model airplane. Now I know it’s for real.”