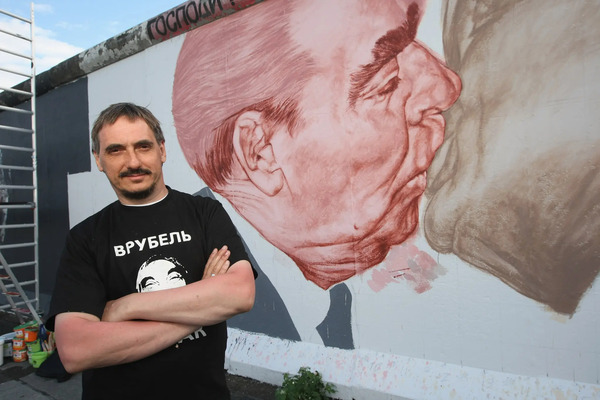 A Russian-born painter, he created a mural of the Soviet leader Leonid Brezhnev smooching the East German leader Erich Honecker — and with it a tourist attraction.

BERLIN — Dmitri Vrubel, a Russian artist-provocateur best known for a startling mural on the Berlin Wall depicting the Soviet leader Leonid Brezhnev laying a fat kiss on the mouth of the East German leader Erich Honecker, died on Saturday in Berlin. He was 62.

His wife and longtime artistic partner, Victoria Timofeeva, said the cause was heart failure related to a Covid-19 infection.

In 1990, the year Germany reunified, Mr. Vrubel was one of 117 artists from 21 countries to descend on a surviving stretch of the Berlin Wall, which had fallen the previous year. With paint and a ladder, he recreated a larger-than-life version of a 1979 photo of a kiss between Mr. Brezhnev and Mr. Honecker.

Below it he wrote a caption in Russian and German: “My Lord, give me the strength to survive this deadly love.”

By that time Communism was falling around the globe, and the Soviet Union was not long for this world. Mr. Honecker was out of a job, and Mr. Brezhnev was dead.

But the mural took on a life of its own as a subversive commentary on the dissolute ways of a dying system.

“More than any other work of art, it symbolizes the peaceful triumph over the seedy empire of antiquated Communist leaders,” the German newspaper Spiegel wrote in 2009.

The Berlin daily Tagesspiegel called it “a symbol of peace, love and transgression of all kinds.”

The image became an emblem of the freewheeling, graffitied, artistic Berlin of the 1990s. More than three decades on, it remains one of the most photographed murals in Berlin and is replicated on countless T-shirts, mugs and postcards.

Mr. Vrubel said he copied the image from a picture he saw in the French magazine Paris Match. The photograph was taken by the French photojournalist Régis Bossu in 1979 in East Berlin, just a few miles from where it would later become famous, on the occasion of East Germany’s 30th anniversary.

Although the sight of two elderly heads of state engaging in a sloppy kiss on the mouth was shocking to many modern Western viewers, many of whom assumed the image was purely the creation of the artist’s imagination, the gesture was a certain tradition among Communist leaders, who used it to symbolize their solidarity.

Friends thought Mr. Vrubel was crazy for wanting to paint on the Berlin Wall, a relic of a bygone era, he recounted in a 2013 interview with the government-funded Goethe Institute. But he knew he was onto something.

Indeed, the painting’s satirical simplicity and power to shock were so resonant that it has often been copied, with other leaders subbing in for Mr. Brezhnev and Mr. Honecker.

Dmitri Vrubel was born in Moscow on July 14, 1960, the only child of two engineers.

He started painting at 15 and studied at the graphic art department of the Moscow State V.I. Lenin Pedagogical Institute. He married at 18 and had three children with his first wife before divorcing and marrying Ms. Timofeeva, with whom he had a son.

In addition to her, he is survived by three sons, Mikhail, Alexandr and Artemy; a daughter, Natalia; and four grandchildren.

After painting his Berlin mural, Mr. Vrubel returned to Moscow in 1990 and found some success there in 2001 with a limited-edition calendar capturing 12 moods of Mr. Putin.

In 2009, long after his mural had become a must-see stop on any Berlin itinerary, he returned to Berlin to repaint it.

The East Side Gallery artist collective, which manages the mural-filled stretch of wall, had the surface cleaned and asked artists to repaint their famous works with more durable paint. Mr. Vrubel initially balked when he learned that the artists were being paid only 3,000 euros, or roughly $3,000, for their efforts, but he finally accepted the fee and repainted his famous image anyway.

That was his only financial remuneration for the work. Because it was public art, he did not have the copyright to his image and never made a cent off the merchandise, Ms. Timofeeva said.

Mr. Vrubel believed that the second version was an improvement. “In two decades I have become a better painter,” he told Spiegel in 2009.

Settling in Berlin in 2010, he became a fixture of the Russian expatriate community. In a small exhibition space in the tony Prenzlauer Berg district, he and Ms. Timofeeva created an open studio where people could watch them create art and interact with them.

Among his other works in Berlin was the Evangelical Project, a series of paintings focused on the faces of both famous and ordinary people.

“He took boring pictures from newspapers that no one would ever look at and made art out of it,” Ms. Timofeeva said. “That was his method.”

Recently he worked in the medium of virtual reality, creating exhibition spaces that could be viewed through virtual reality goggles. It gave him what he long craved, said Ms. Timofeeva: a canvas of unlimited size.

Mr. Vrubel also painted a second, lesser known mural, “Thank you, Andrei Sakharov,” on the Berlin Wall in 1990 in honor of the nuclear physicist who developed thermonuclear weapons before becoming a dissident and human rights activist.

After the Russian invasion of Ukraine, Mr. Vrubel became an outspoken critic of the war.

“Because of this whole situation since February, he was on fire before my eyes,” said Ms. Timofeeva, who was born in Odessa, Ukraine. “He was so furious, so sad, so ashamed.”

But he will be forever known for one work, which had come to him in an instant.

“When I first saw the Berlin Wall, I knew exactly what I wanted to paint: Brezhnev and Honecker,” he said in the 2013 interview.

“A picture for Berlin,” he added, “for the Germans.”