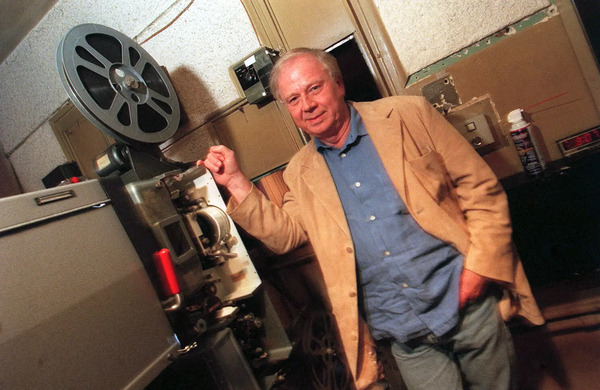 He made it big in Hollywood with box-office hits, but he’s best remembered for a harrowing, Oscar-nominated German film set inside a U-boat in World War II.

Wolfgang Petersen, one of a handful of foreign directors to make it big in Hollywood, whose harrowing 1981 war film, “Das Boot,” was nominated for six Academy Awards and became one of Germany’s top-grossing films, died on Friday at his home in the Brentwood section of Los Angeles. He was 81.

The cause was pancreatic cancer, according to Michelle Bega, a publicist at the agency Rogers & Cowan PMK in Los Angeles. His death was announced on Tuesday.

Mr. Petersen was the most commercially successful member of a generation of filmmakers active in West Germany from the 1960s to the ’80s, whose leading lights included Rainer Werner Fassbinder, Wim Wenders and Werner Herzog. But he was equally known in Hollywood.

Over five decades Mr. Petersen toggled between his native Germany and the United States, directing 29 films, many of them box-office hits like the 1990s political thrillers “In the Line of Fire,” with Clint Eastwood, and “Air Force One,” with Harrison Ford.

With a knack for genre filmmaking — action films were another strong suit — he also made forays into fantasy (“The NeverEnding Story”), sword-and-sandal epic (“Troy”) and science fiction — all while attracting marquee names to star in them, like Dustin Hoffman in “Outbreak,” Brad Pitt in “Troy” and George Clooney in “The Perfect Storm.”

For all his success in Hollywood, however, “Das Boot,” a tense drama about sailors on a German U-boat during World War II, is the work for which Mr. Petersen will mostly likely be remembered. In the English-speaking world, that frequently mispronounced title alone (“Boot” is spoken exactly like the English “boat”) has attained a kind of pop-cultural status, thanks to references on “The Simpsons” and other TV shows.

“‘Das Boot’ isn’t just a German film about World War II; it’s a German naval adventure epic that has already been a hit in West Germany,” Janet Maslin wrote in her review in The New York Times when the film opened in the U.S. in early 1982.

The movie won high praise for its historical accuracy and the clammy, claustrophobic effect achieved by the cinematographer Jost Vacano, who shot most of the interior scenes with a small hand-held Arriflex camera. Although the critical response in Germany was divided, with some accusing the film of glorifying war, it encountered a more uniformly positive response abroad. Nowadays it is considered among the finest antiwar films ever made.

“Das Boot” (also titled “The Boat” in English-speaking countries) grossed over $80 million worldwide, and though it did not win an Academy Award, its six Oscar nominations — including two for Mr. Petersen, for direction and screenplay, and one for Mr. Vacano, for cinematography — remain a record for a German film production. (It was not nominated in the best-foreign-language-film category; West Germany’s submission that year was Mr. Herzog’s “Fitzcarraldo,” which did not make the Academy’s short list for the Oscar).

Mr. Petersen prepared various versions of “Das Boot” over the next decade and a half. In 1985, German TV broadcast a 300-minute version (twice as long as the theatrical release), which Mr. Petersen claimed was closer to his original vision but commercially unfeasible at the time.

After “Das Boot,” he teamed up with the producer Bernd Eichinger, whose fledgling studio, Constantin Film, co-produced the English-language “The NeverEnding Story,” an adaptation of a 1979 fantasy novel by the best-selling German children’s author Michael Ende.

Released in 1984, “The NeverEnding Story,” about a bullied boy who enters into an enchanted book, was another-box office hit in Germany and abroad — although it, too, received its share of negative reviews, including from The Times’s film critic Vincent Canby, who called it “graceless” and “humorless.”

Despite a tepid U.S. box-office return, which Mr. Petersen chalked up to the film’s being “too European,” “The NeverEnding Story” became a cult favorite over the decades, for its trippy production design, scrappy special effects and synth-heavy theme song, written by Giorgio Moroder and sung by the British pop singer Limahl.

The film was mostly shot at Bavaria Film Studio, near Munich, where present-day visitors can ride Falcor, the “luck dragon” that Mr. Canby compared to “an impractical bath mat.” (The studio’s theme park, Bavaria FilmStadt, also offers tours of the submarine from “Das Boot.”)

Wolfgang Petersen was born on March 14, 1941, in Emden, in Northern Germany. His father was a naval lieutenant in World War II who later worked for a shipping company in Hamburg.

Growing up in the immediate postwar period, the young Mr. Petersen idolized America and American movies. On Sundays he would go to matinee screenings for children at the local cinema to see westerns directed by Howard Hawks and John Ford and starring Gary Cooper and John Wayne.

“I got to know the medium of film when I was 8 years old, and I was immediately enthusiastic about it,” he told Elfriede Jelinek, a future Nobel Prize winner for literature, in a 1985 interview for German Playboy. “When I was 11, I decided I wanted to become a film director.”

In 1950, his family moved to Hamburg, and when Wolfgang was 14, his father gave him an eight-millimeter film camera for Christmas.

After graduating from high school, Mr. Petersen was exempted from compulsive military service because of a spine curvature. In the early 1960s, he worked as an assistant director at the Junges Theater (now the Ernst Deutsch Theater) in Hamburg. He then studied theater in Hamburg and Berlin for several semesters before enrolling at the German Film and Television Academy Berlin, West Germany’s first film school, which opened in 1966.

In 1970, his graduation film, “I Will Kill You, Wolf,” was picked up by West German television, and this led to a directing offer for the long-running German crime series “Tatort.”

Over the next decade, Mr. Petersen worked at a feverish pace, directing for both television and the big screen, starting in 1974 with the psychological thriller “One or the Other of Us.”

From the beginning, audience approval was of central importance to him. “I crouched in the cinema to see how the audience would react” to one particular film, he recalled in the Playboy interview. “And what happened? People walked out of the film. I was devastated. Because I’m obsessed with making films for everyone.”

He often succeeded, with popular early-career thrillers that tackled thorny political and social issues. “Smog” (1972) dealt with the effects of pollution in the Ruhr, the industrial region in Northwest Germany. “The Consequence” (1977) was controversial for its frank depiction of homosexuality, a taboo topic at the time.

He was married to the German actress Ursula Sieg from 1970 to 1978. He later married Maria-Antoinette Borgel, whom he had met on the set of “Smog,” where she worked as a script supervisor.

He is survived by his wife as well as a son from his first marriage, Daniel, a filmmaker, and two grandchildren.

Mr. Petersen had nearly 20 films to his credit by the time he made “Das Boot.” A triumph that few, if any, could have predicted, the movie established his international reputation and opened the door to Hollywood.

In his autobiography, “I Love Big Stories” (1997, written with Ulrich Greiwe), Mr. Petersen recalled the first American test screening of “Das Boot” in Los Angeles. At the beginning, the audience of 1,500 applauded when the screen flashed with the statistic that 30,000 Germans onboard U-boats were killed during the war. “I thought: This is going to be a catastrophe!” Mr. Petersen wrote. Two and a half hours later, the film received a thunderous ovation.

After “The NeverEnding Story,” Mr. Petersen made “Enemy Mine” (1985), a science fiction film starring Dennis Quaid about a fighter pilot forced to cooperate with a reptilian enemy after they both land on a hostile alien planet. Ms. Maslin called it “a costly, awful-looking science-fiction epic with one of the weirdest story lines ever to hit the screen.”

A year later, Mr. Petersen moved to Los Angeles, where he would remain for two decades, working with big stars in a string of mainstream successes that included the political dramas “In the Line of Fire” (1993), about a Secret Service agent’s efforts to prevent a presidential assassination, and “Air Force One” (1997), about the hijacking of the presidential jetliner. There were also the disaster films “Outbreak” (1995), about a deadly virus, “The Perfect Storm” (2000), about commercial New England fishermen caught in a terrifying tempest, and “Poseidon” (2006), a remake of “The Poseidon Adventure,” the 1972 blockbuster about a capsized luxury liner.

Even at their most commercial, Mr. Petersen’s films often had undercurrents of political commentary. Discussing the “Iliad”-inspired “Troy” (2004), Mr. Petersen drew parallels between Homer’s epic and the reign of George W. Bush. “Power-hungry Agamemnons who want to create a new world order — that is absolutely current,” he told the German newspaper Süddeutsche Zeitung.

His film career seemed to come full circle in 2016 with “Vier gegen die Bank,” a remake of his 1976 comedy-heist film based on an American novel, “The Nixon Recession Caper,” by Ralph Maloney. It was Mr. Petersen’s first German-language film since “Das Boot” a quarter-century earlier.

Throughout his career, he seemed unconcerned by critics who called his artistic merit into question.

“If someone asked me whether I felt like an artist, I would have a strange feeling, because I don’t really know,” he once said. “What is an artist? Maybe it’s someone who produces something much more intimate than film, more like a composer or writer or painter.”