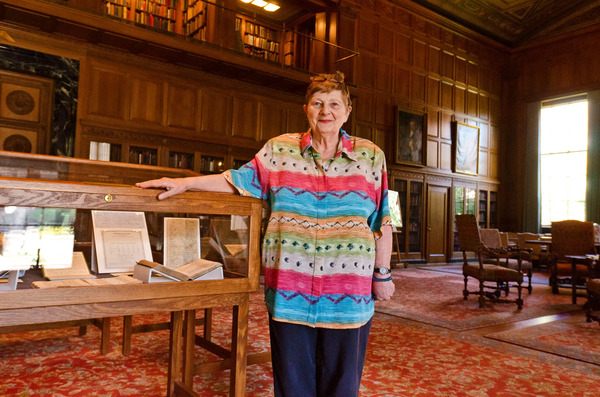 The cookbook collection that began in the basement of her home became the Janice Bluestein Longone Culinary Archive at the University of Michigan.

Jan Longone, a curious, cordial and diligent food scholar who started a mail-order cookbook business from her Michigan basement that led to friendships with towering culinary figures like Julia Child and grew into one of the nation’s great cookbook collections, died on Aug. 3 in Ann Arbor, Mich. She was 89.

The death, at a hospice center, was confirmed by her husband, Daniel Longone.

Ms. Longone’s career had the most practical of beginnings. In the 1950s, when she and her husband were both in graduate school at Cornell University, where she studied Chinese history and he studied chemistry, some fellow students invited them to a dinner party where they served the Indian food they had grown up eating.

The students asked Ms. Longone to reciprocate with a typical American meal. She realized she had no idea what that might be or how to prepare it, so she went to a library and discovered the vast world of cookbooks.

That trip led to a lifetime of collecting food-related books and ephemera, including pamphlets about Jell-O, instructions for kitchen appliances and the nation’s first cookbook, “American Cookery,” written by Amelia Simmons and published in 1796. That book’s 47 pages contain recipes for pumpkin pie and the first pairing of cranberry sauce to complement roast turkey, Thanksgiving stalwarts that endure today.

She also secured an 1871 text believed to be the nation’s first Jewish cookbook.

Ms. Longone had a fondness for charity and community cookbooks from the 1800s and early 1900s, which she thought painted a picture of the nation’s scientific advancement, immigration patterns and cultural shifts.

Although her collection was largely Eurocentric and missed elements of the American immigration story, it included the only original copy of the first known American cookbook by a Black woman. Food scholars had long believed that distinction belonged to “What Mrs. Fisher Knows About Old Southern Cooking,” published in 1881. But then a West Coast bookseller called Ms. Longone and asked her if she might want a fragile 39-page book by Malinda Russell, “A Domestic Cook Book: Containing a Careful Selection of Useful Receipts for the Kitchen,” printed by a newspaper in Paw Paw, Mich., in 1866. She paid $200.

Janice Barbara Bluestein was born on July 31, 1933, in the Dorchester neighborhood of Boston. Her parents were Ukrainian immigrants and secular Jews. Her father, Alexander Bluestein, was a restaurant equipment sales manager. Her mother, Edith (Gropman) Bluestein, made the family table, which was often filled with classic Ashkenazi dishes, the center of their domestic life.

She met Mr. Longone when they were teenagers who spent their summers swimming at Revere Beach, near Boston. “I splashed her and she turned around and said, ‘You’ll be sorry,'” Mr. Longone said in a phone interview. They married in 1954, after she graduated from what was then Bridgewater State Teachers College (now Bridgewater State University) with a bachelor’s degree in history.

Mr. Longone, a wine aficionado, soon became an enthusiastic partner in his wife’s literary pursuits. The two searched out small bookstores on their summer drives from their home near the University of Michigan, where Mr. Longone was a professor, to Massachusetts, and later during extensive travels to Europe.

In 1972, Ms. Longone realized that she could sell some of their acquisitions and began the Wine and Food Library, a mail-order bookshop. Her reputation grew along with her collection. James Beard became a regular customer. Before long, the basement of their modest house was full of books that became the nexus of a growing culinary movement.

She sold literary works from the likes of the author M.F.K. Fisher (whom she knew, of course) and less ostentatious books, like “Betty Crocker’s Picture Cook Book” (1950). She had a particular fondness for Gourmet magazine, which started when her husband gave her a copy of the first Gourmet cookbook, followed by a $50 lifetime subscription. Over the years, they collected every issue, save the rare March 1941 edition.

Ruth Reichl, who presided over Gourmet from 1999 until Condé Nast shuttered it in 2009, said Ms. Longone was one of the first to understand the power of history told through the lens of cooks.

“She knew the value of looking at cookbooks unmitigated by a historian’s perspective,” Ms. Reichl said in an interview.

Ms. Longone’s collection, nearly 25,000 items strong, became the Janice Bluestein Longone Culinary Archive at the University of Michigan and the antecedent for dozens of other culinary libraries. It also powered the development of academic food studies programs.

“Other libraries were uninterested in collecting food materials, but she knew exactly what she had and why it mattered,” Marion Nestle, a professor at New York University, wrote in an email. “I was awe-struck meeting her and wanted all that for N.Y.U.” Ms. Nestle would go on to establish the nation’s first food studies program, which draws heavily on the collection of food and cookery materials at N.Y.U.’s Fales Library.

Ms. Longone also influenced a new generation of booksellers who, like her, realized the importance of cataloging rare and essential works about cookery and drink.

“Her legacy is vital to my existence,” said Celia Sack, owner of the San Francisco bookstore Omnivore Books.

Ms. Longone had a significant influence on modern American restaurant culture, especially in the late 1970s and ’80s as it threw off the constraints of continental cuisine and began to develop a more eclectic, regional and adventurous style.

She was a yenta to chefs, passing on her vast food knowledge and connecting them to one another before Instagram provided a space to network and allowed them to search the web with a few keystrokes for a particular style of cooking.

Using material from her collection, Ari Weinzweig opened Zingerman’s Delicatessen in Ann Arbor and its mail-order artisan food business in 1982 with Paul Saginaw.

“I knew relatively very little about food, and we were about to start selling artisan cheese and smoked fish, so I needed to learn,” he said. “As a history major, going to Jan’s basement to look at books was way more exciting for me than going to a candy store.”

Without that basement of books, the chef Rick Bayless said, he might not have had his career. In the late 1970s, he had taken a year off from writing an anthropology dissertation to teach cooking classes. He turned to Ms. Longone for help.

“She would lead you down the rickety back stairs to her basement with all these dehumidifiers going and these metal racks full of books and you could spend as long as you wanted there,” he said in an interview. “I thought I had struck gold.”

She told the editor of The Ann Arbor Observer about Mr. Bayless and his classes, and the subsequent article launched his cooking career.

Ms. Longone founded the Culinary Historians of Ann Arbor in 1983 as a way to bring together people interested in the study of culinary history and gastronomy. She was a founding member of the American Institute of Wine and Food and served on the editorial board of Gastronomica: The Journal of Food and Culture. She also hosted “Adventures in Gastronomy,” believed to be the first food show on public radio, and was a judge for numerous cookbook awards.

In addition to her husband, she is survived by her brother, Bernard Bluestein.

Despite her generosity with cooking information, Ms. Longone was tight-lipped about her sources. But she always gave would-be collectors the same advice: “When you see something you want, buy it.”

“I’ve been guilty of this mistake myself,” she said. “I never regret the things I’ve bought, but I do regret some things I didn’t buy.”