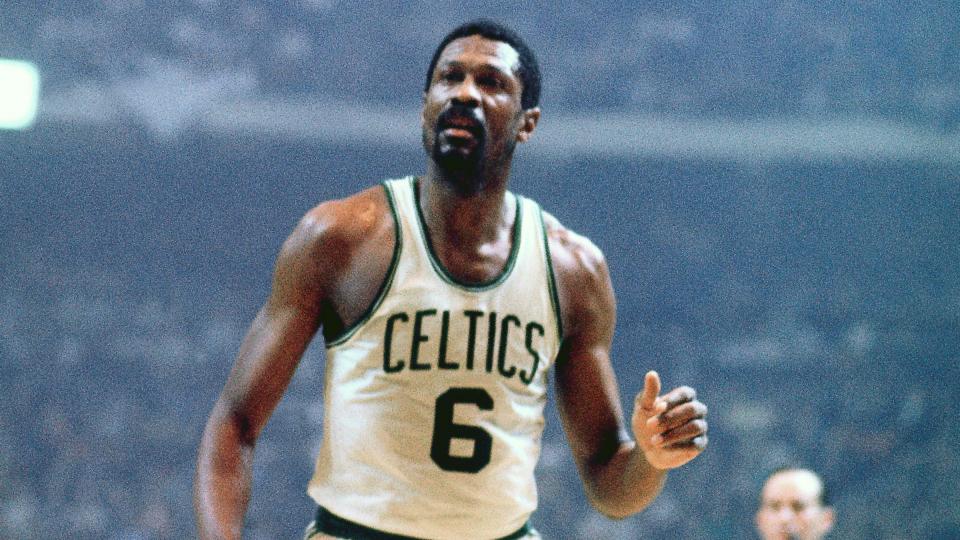 In his 13 seasons in the National Basketball Association (NBA) with the Boston Celtics, Bill Russell, who has died aged 88, won 11 championships, a record unmatched in team sports. But his place as one of the most influential American athletes of the 20th century, behind only Muhammad Ali and perhaps the baseball player Jackie Robinson, is based on more than his implacable will to win, and his intelligence in allying his skills to his teammates’ to facilitate that process.

He was the NBA’s first black star, five times the league’s most valuable player. His defensive leaping ability transformed basketball from a horizontal to a vertical game. And in 1966, when the Celtics coach Red Auerbach stepped down and named Russell his successor, he became the first black head coach in modern America’s four major sports leagues.

Off the court, he was a trailblazer in the fight for human dignity. Russell stood beside Martin Luther King during his “I have a dream” speech in Washington; when Ali resisted the draft, Russell was next to him at the “Cleveland summit” of star athletes, with the gridiron star and actor Jim Brown on the other side.

Russell came to his abilities late, but learned his sense of self-worth early. He was born in deeply segregated Monroe, Louisiana, and his father, Charlie, taught young Bill what his father had taught him: “A man has to draw a line inside himself he won’t allow any man to cross.” When Charlie was denied a pay rise he believed he deserved, he went to work in Detroit, leaving his wife, Katie (nee King), to look after their sons, Bill and his brother, Charlie Jr. Bothered by the cold winters, Charlie moved to Oakland, California, started a profitable trucking business transporting day labour, and sent for the family. But when Bill was 12, Katie died, and Charlie took a job in a steelmill in order to have more time with his children.

Bill could not make his high-school basketball team until his last year. His only college scholarship offer came from the University of San Francisco, but he developed quickly. USF won consecutive national basketball championships in his junior and senior seasons, losing only one game and winning 55 in a row. In the 1956 final against Iowa, Russell scored 26 points, had 27 rebounds and blocked 20 shots. He was the leading scorer on the US Olympic team that won the gold medal in Melbourne that year, winning by an unmatched average of 53.5 points per game.

Meanwhile, Auerbach had traded two star players to get the second pick in the NBA draft, and the Celtics owner, Walter Brown, persuaded the Rochester Royals to pass on Russell with the first pick, by offering their arena the chance to host a money-spinning two-week run of the Ice Capades ice-skating show in exchange. After the Olympics, Russell led the Celtics to the 1957 title, over the St Louis Hawks. In fact, Russell could probably have claimed 12 titles in 13 years had he not sprained his ankle in game three of the 1958 finals, also against the Hawks, which the Celtics then lost.

At 2.08m (6ft 10in) and 99kg (15st 10lb), Russell possessed an agility that changed the way big centres played. In college he would run the 440 yards (the distance now replaced by the 400m) and high-jumped; at the 1956 Coast Relays his 2.06m jump tied with that of Charlie Dumas, who won the gold medal in Melbourne. Russell played centre like a sweeper; his teammates overplayed opponents, defending tightly, knowing he could cover their mistakes. He controlled his blocks and rebounds to get the ball upcourt to teammates; the trademark Celtic “fast-break” offence was born.

He also won American team sports’ greatest individual rivalry, against Wilt Chamberlain, who was three inches taller and much bigger. Chamberlain broke the records, once scoring 100 points in a single game, but Russell won the majority of their meetings, and all but one of their playoff contests. Wilt thought what was best for Wilt was best for the team; as both player and coach Russell sought ways to challenge his teammates without the common superstar problem of undermining them.

Although he was totally devoted to the Celtics, the first NBA team to draft a black player and the first to start an all-black lineup, Russell’s relationship to the city of Boston, Massachusetts, which he described as “a flea market of racism”, was harder. His house in the suburbs of nearby Reading was burgled and vandalised. When he complained to the police about bins being overturned, they laughingly blamed raccoons. When Russell asked where he could get a gun licence to shoot raccoons, the vandalism stopped. Russell protected his privacy by refusing to give autographs; I know, because I asked for one when I was working near him at the 1976 Olympic basketball final in Montreal. He declined politely, but shook my hand. He worked as a TV commentator, where he often seemed bored by the constraints on opinion offered on air, and then as coach and general manager of the Seattle SuperSonics, 3,000 miles away from Boston. His success for four years in Seattle was followed by an unsuccessful spell with the Sacramento Kings; Russell found players without his and the Celtics’ drive for team success frustrating. He worked tirelessly for charity, especially a mentoring programme that he helped set up. Russell co-wrote four books; Second Wind (with Taylor Branch, 1979) and Red and Me (with Alan Steinberg, 2009) are classics of sporting memoir. In later years, his public persona mellowed to match his private one, helping cement his legacy. He was reconciled with Boston, where in 2013 a statue of him was unveiled in City Hall Plaza. The NBA’s trophy for most valuable player in the finals is named after him. In 2012 he was awarded the presidential medal of freedom by Barack Obama; in 2017, when President Donald Trump called for NFL players taking a knee to “be fired”, Russell released a video of himself, kneeling, holding that medal.